Today was the day we received the final draft of the Synod document. We were to have it read to us in the morning, and then proceed to voting on it in the afternoon.

Now you may be thinking, "Read to us? You mean they didn't give you paper copies?" Actually, they did, but those copies were merely in Italian. Provisions had apparently not been made to have the draft translated into English, so instead it was read to us with simultaneous translation being offered in English, French, Spanish, Portuguese, and German. We had to pay close attention, and I had my red pen and yellow highlighter ready to make notes on my copy. I also had my personal annotated copy of the initial draft ready, so as to be able to make comparisons.

Wow, the reading was long. The document had 167 numbered paragraphs, and some of those had sub-paragraphs, so it took a while. We only had time to cover parts I and II of the draft in the morning session, and that session was 3.5 hours long! We were told that we would simply have to read the rest of the document ourselves, at home. Obviously, many of us were not happy with that, as not everyone knew Italian. For myself, I can read Italian, but with the help of a dictionary and obviously much more slowly. There was not way this was going to fly.

We took a break for lunch, and the Canadian bishops were invited to a delicious lunch at the home of Cardinal Ouellet. 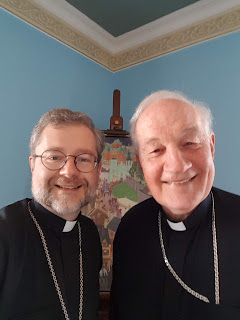 The mood was upbeat: in general, we were pretty happy with the document so far. Was it perfect? No. But it was clear that the undersecretaries responsible for the drafting of the document had been listening. Personally, all my proposals for amendment had found their way into the document. Others felt the same.

We were asked to return to the Synod hall for 4:00 pm instead of the usual 4:30 pm, because of the anticipated length of the voting procedure. The vote was paragraph by paragraph. Again, we used our voting handsets. We knew the device was activated when our name appeared on the screen. 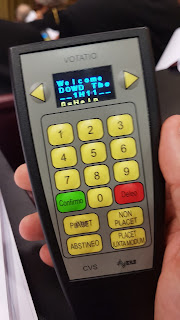 We would then enter our vote, using either the "placet" or "non placet" buttons. Our vote would then appear on the screen. 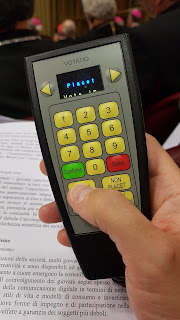 After that, we would press the green "confirmo" button to lock in the vote, or press the red button to correct it in case we accidentally pressed the wrong one. 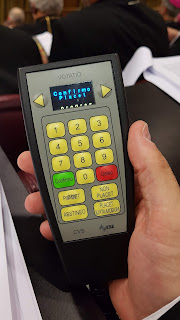 The vote would close after about a minute, and the results would appear on the large overhead display in the Synod hall.

We proceeded this way for parts I and II, which had been read out earlier in the morning. As for part III, however, it was clear that the word had gone to the secretariat that it was not acceptable to ask us to vote on a text that many of us did not understand. So after that first set of votes, part III was read out, with translation once again. It took a long time, but this was the most important part of the document, and I am glad it was done. I am convinced that not doing it would have potentially cast a shadow over the process and over the meaning of the subsequent votes. Once the reading was done, we proceeded to the final votes.

In the end, every single paragraph met the 2/3 threshold needed for a vote to pass. A few were unanimous in favour, while a many had only 1 or 2 against. It actually became a bit of a joke: who was the one synod father who was consistently voting against everything? Of course, it might not have been one person throughout, but it got funny when we saw that someone had actually voted against a paragraph extolling the Virgin Mary. Maybe his control was broken or he didn't know how to use it properly. I'm hoping the Blessed Mother didn't take it personally! :-)

If you are interested, you can see the final document and the results of the voting on the Vatican web site (in Italian). Some of the votes were closer than others, and I'll see if I can share my interpretation of those votes in a future blog post.

As for the members of the Synod, we burst into applause then the final votes were tallied. By then it was almost 8:00 pm (afternoon sessions normally ended at 7:15 pm), but while we were tired we knew something important had happened. There were a few speeches, including one by Cardinal Sako (who had presided at the afternoon voting session), and then the Holy Father spoke. 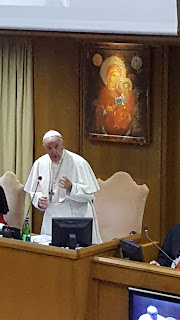 He had been silent for much of the Synod, just listening to the various interventions. We were eager to hear what he had to say, and his words put everything we were living in perspective:


I too must say thank you, to you all. To Cardinal Baldisseri, to Msgr. Fabene, to the delegate presidents, to the Rapporteur, to the special secretaries – I said that they “left their skin” in the preparatory document; now I think they leave to us their bones, as they have lost everything! Thanks also to the experts: we have seen how one can pass from a martyr text to a martyr commission, that of the redaction, which has worked with great effort and great patience. Thank you. Thank you all, auditors, and among the auditors, the young people in particular, who brought their music into the Hall – “music” is the diplomatic word for noise, but that is how it is… Thank you.

There are two little things that are close to my heart. First: to reiterate once more that the Synod is not a Parliament. It is a protected space for the Holy Spirit to act. For this reason, the information that is given is general and it is not the most particular things, the names, the way of saying things, with which the Holy Spirit works in us. And this was a protected space. Let's not forget this: it was the Spirit who worked here. Second thing, that the result of the Synod is not a document, I said it at the beginning. We have plenty of documents. I do not know if this document will have any external effect, I do not know. But I certainly know that it must have an effect in us, it must work in us. We have drawn up the document, the commission; we studied it, we approved it. Now the Spirit gives us the document so that it may work in our heart. We are the recipients of the document, not the people outside. May this document work; and we must pray with the document, study it, ask for light ... It is for us mainly, the document. Yes, it will help many others, but the first recipients are us: it is the Spirit Who has done all this, and returns to us. Please do not forget it.

And a third thing: I think of our Mother, the Holy Mother Church. The last three numbers on holiness [in the document] show what the Church is: our Mother is Holy, but we children are sinners. We are all sinners. Let us not forget that expression of the Fathers, the “casta meretrix”, the holy Church, the Holy Mother with sinful children. And because of our sins, the Great Accuser always takes advantage, as the first chapter of Job says: he goes around, he goes around the Earth looking for someone to accuse. At this moment he is accusing us strongly, and this accusation also becomes persecution; today’s President [Patriarch Sako] is able to say so: his people [the Church in Iraq] are persecuted, as are so many others of the East or in other places. And it also becomes another type of persecution: continuous accusations to soil the Church. But the Church must not be soiled; her children yes, we are all soiled, but the Mother is not. And this is why it is time to defend the Mother; and the Mother is defended from the Great Accuser with prayer and penance. This is why I asked, in this month that ends in a few days, to pray the Rosary, to pray to Saint Michael the Archangel, to pray to Our Lady to always cover the Mother Church. Let us continue to do so. It is a difficult moment, because the accuser, attacking us, attacks the Mother, but the Mother is not to be touched. I wanted to say this from the heart at the end of the Synod.

And now, the Holy Spirit gives this document to all of us, to me to, to reflect on what it means to us. Thank you so much to everyone, thank you all!


With that, we headed home, tired, hungry but full of joy.